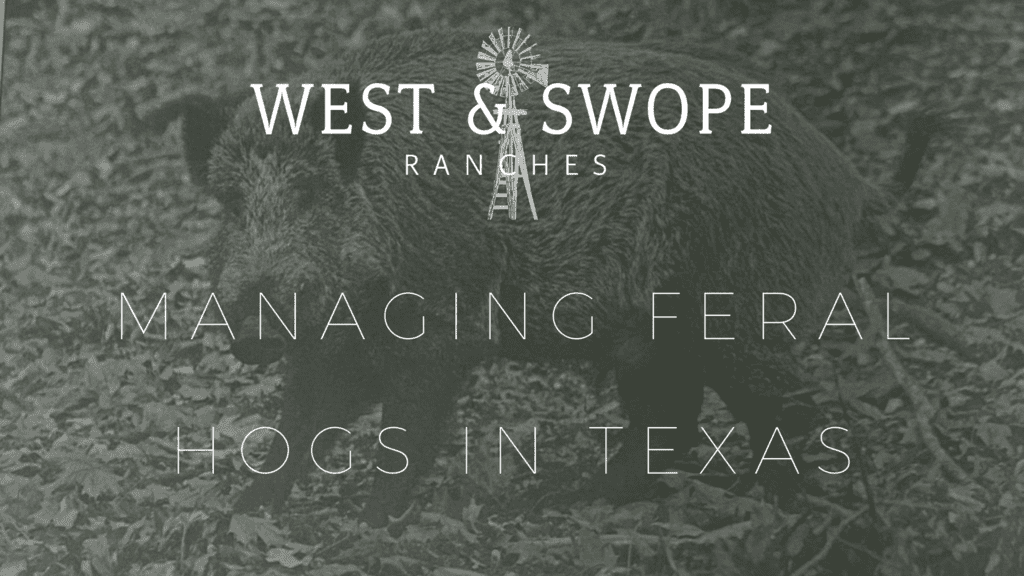 The feral hog, Russian boar, Razorback, Rooter, or whatever you prefer to call it, is a topic of campfire banter and heated debate throughout Texas and much of the U.S.  From the boardroom to the bunkroom, no other creature stirs the emotions of so many people.  Sportsmen, ranchers, biologists, ecologists, and even developers have wide and diversified opinions.  However, most agree that the damage to the habitat, competition with native species, and damage to agricultural commodities far outweighs any potential assets.

Hogs are not native to Texas, first arriving during the mid-1500s with the Spanish incursion into northeast Texas, followed by Robert LaSalle’s ill-fated and tragic attempt to colonize the Texas coast for France in 1685.  Throughout the 1700s swine could be found at various Spanish missions; however, it was not until the early 19th century, with intensified Texas colonization, that their numbers began to increase.  They provided an important source of food and lard for these early settlers.  During this period hogs could range freely and many could not be recaptured, would escape, or simply were released.  Sustenance hunting by man, diseases, parasites, and natural predators generally kept their population in check until the early 20th century.

Beginning in the 1930’s, some landowners released European wild hogs (Russian Boars) in a few isolated areas along the Texas coast and lower hill country to increase revenue through sport hunting.  For the same reason, intentional releases of domestic hogs into the wild since the early 1970’s, has augmented this increasing feral swine population.  And because all swine belong to the family Suidae, interbreeding between true Eurasian and its feral counterparts readily occurred.

Owing principally to these continuing releases of domestic hogs into the wild, exponential population growth and range distribution ensued.  Having very few natural predators besides man; this population explosion, which began in the latter half of the twentieth century, was augmented by better livestock and wildlife practices, including water development and supplemental feeding, and provided the perfect storm for the highly prolific feral hogs.  Active and intense wildlife management aimed at our native game animals, especially toward trophy white-tailed deer, have greatly benefitted our wild pigs. And the hogs appreciate all the hard work these trophy white-tailed deer managers accomplished.  Apart from a few isolated locations, they can now be found throughout Texas with an estimated population conservatively set at 1.5-2 million animals.

The color, shape, and size of feral hogs varies greatly with the average size of a mature male (boar) around 150-175 pounds but may grow to several hundred pounds.  Feral hogs breed throughout the year; however, contrary to popular belief, do not have 3 litters per year.  Most sows will only have one litter per year, but with adequate nutrition, a small percent may have a second litter.  Nevertheless, with breeding commencing at 6-9 months of age, a single sow may become a grandmother at the end of a year.  Feral hogs are omnivorous and opportunistic and will eat almost anything, although feed predominantly on vegetational materials (grasses, forbs, roots, tubers, etc.) encompassing only limited animal matter (insects, reptiles, carrion, etc.).  Their diet frequently shifts based on food availability and seasons.

It is not the hog’s diet that is concerning, but rather their feeding behavior that causes the most anxiety among landowners.  Their trampling, rooting and wallowing actions can scar and damage native rangelands, destroy habitat, destabilize tank dams, spoil water and watering areas, and destroy many agricultural related entities such as livestock and wildlife feeders.  Furthermore, feral hogs compete with native wildlife for preferred foods such as mast and forbs and may transmit certain diseases to domestic livestock and native wildlife.

Not all people have such a negative opinion and total disdain for these free-ranging destroyers.  Many people suggest that hogs can actually benefit rangeland through their rooting activities which causes soil disturbance, thus allowing water penetration and ultimately promote forb production.  By providing an additional hunting species and off-season hunting opportunities, hunting lease values may increase thus providing economic returns.  They are challenging, extremely intelligent and wary creatures, and provide good table fare. The capture and selling of wild hog meat for export to foreign countries has provided economic returns for enterprising individuals.

With this exploding hog population and despite the diverse opinions, the question remains if the feral hog can be controlled or managed.  Throughout its range, attempts at eradicating a hog population have been unsuccessful and virtually impossible.  Controlling a local population, which is the best one can hope to achieve, requires continuous effort and may be expensive.  Hunting (all methods), trapping, and fencing are the most common approaches of controlling feral hogs.

I recommend considering and implementing a feral hog management strategy within the overall ranch or wildlife program.  This could include requiring leasees to harvest hogs, offering feral hog package hunts, helicopter hunts, marketing the meat, bartering for ranch improvements, and entering partnerships with reputable trappers and outfitters.  Implementing a feral hog management program may require extra effort and time, but it aids in reducing or keeping the population stable, provides economic returns, and provides recreational opportunities for sportsmen.  Remember, the same effort and energy used to combat an expanding wild hog population can be redirected to benefit the landowner.

What does the future hold for feral hogs in Texas?  Fredrick Olmstead who traveled through Texas in 1854 stated that at his camp near Crockett, “We were annoyed by hogs beyond all description.  At almost every camp we were surrounded by them; but here they seemed perfectly frantic with hunger.”  He went on to say “These animals proved, indeed throughout Texas a disgusting annoyance, though after procuring an excellent dog a day or two after we were rid of the worst of it.”  The wild hog has been in Texas for over 400 years and has become an integral part of Texas fauna, so whether you consider them an asset or a liability, a benefit or detriment, it is clearly a matter of perspective.